This is the twenty-first book in the Anita Blake series.

Anita partners with Zerbrowski when a fifteen year old girl is taken by the vampires, the plan is to make her one of them. Anita soon finds a group of children and elderly vampires willing to do almost anything, including die, to avoid following a master vampire. But can they find them all in time?

What did I think? I’m less than impressed with this one. This is the first Anita Blake book that has ever taken me 10 days for the first reading.  I was bored. I think Ms. Hamilton has likely been writing Anita too long without a break and it shows. I’m glad that she’ll be writing another series before she comes back to Anita (who I admit, I’m quite fond of.) and I hope we’ll see the Anita I’ve come to know and love back.

Beauty is a short excerpt from the Antia Blake series. 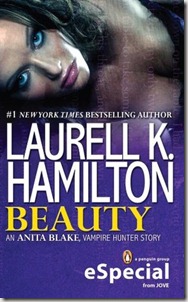 Anita walks in after a night of work, not work and finds Jean-Claude in the tub, waiting for her. Much sexiness ensues.

What did I think? I liked it, for what it was.

What was it? Well, it took me 20 minutes to read the entire thing. It was short, but Laurell said all along it was a sexy outtake from her next book Kiss the Dead.

This is the eighth book in the Anita Blake series.

Anita gets a panicked call from Richard’s little brother Daniel, Richard is in jail in Tennessee, accused of rape, and the full moon is only five days away. Anita drops everything and rushes to his aid, despite the local Master of the City not wanting them there. Once she arrives she discovers that there’s more going on than she knew about and there’s far more trouble to deal with than she’d planned for. And not only with the locals.

What did I think? I love Anita, I reread all the books pretty regularly, they’re comfort reading to me. I’ve spent most of the last two weeks down with the flu and I’ve read this one and the one before it in the series. I wanna be Anita when I grow up.